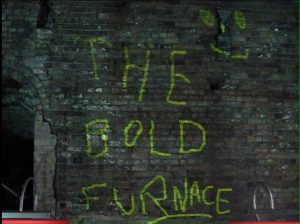 We are trying to re-imagine the interpretation of the Old Furnace at Coalbrookdale, particularly with a view to displaying how it worked using digital technologies and a fun educational trail. It is hoped that this dual approach combined with the interpretation already in place will appeal to young and old alike.

The Old Furnace at Coalbrookdale is almost a blank canvas with regards to interpretation. It currently has a number of interpretation panels which are text/information heavy and image light. Whilst these are very informative, they are not sufficient to capture the attention and kindle the imagination of a young or casual audience. They also do not do justice to this important and complex structure which is one of the key monuments to the Industrial Revolution and to the innovative history of the Ironbridge Gorge.  Our prototype aims to capture this spirit of invention by re-imagining the Old Furnace interpretative space with a particular view to telling the story of how it would have worked and the processes involved. We aim to create an immersive environment using light and sound to transport the visitor back in time to when the furnace was in operation, evoking a sense of the heat, sound and atmosphere that one would have experienced when working there. We have also created a fun interpretative trail for kids. 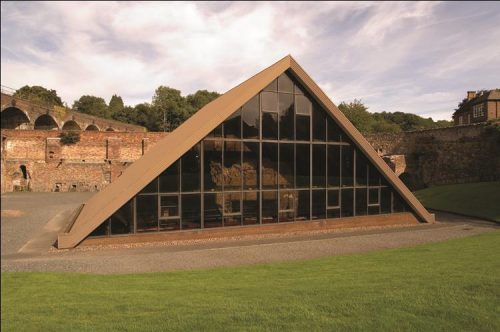 Our prototype forms part of a much wider vision which involves using projected images, animations, sounds and a fun interactive tour to tell the story of how the Old Furnace worked which will appeal to both young and old alike. We envisage a space where the visitor is transported back in time where they are confronted with the sights and sounds of the Old Furnace in action. The ‘journey’ begins on the green outside the cover building as the visitor approaches the monument. They are given a tantalising glimpse of what they can expect inside by hearing the rumble of the furnace and the flickering of the fire. Upon entering the furnace cover building the visitor will hear the crash of the ingredients such as ironstone, coke and limestone  being dumped into the furnace mouth from the charging ramp. This will encourage them to climb the steps up to the bridge of the furnace where they can look into the furnace mouth and see a light show which gives an impression of the heat that would have been generated in the furnace. Whilst we will not be introducing an actual heat source (due to requirement to maintain a stable environment in this sensitive monument) we hope that the use of light and projections in key areas will subliminally provide a sense of warmth to the visitor).

The attention of the visitor will then be caught by the sound of running water and the creaking of the moving waterwheel, which will be projected onto the west elevation of the historic furnace. This will then morph into an animated cross section of the furnace illustrating it worked (with possible voice over if required). The visitor will then hear the distinct sound of the bellows blowing in through the fore and rear tuyere arches, which can then go and explore. From here they will hear a crescendo of noise from within the furnace with their attention drawn to the forehearth arch on the east side of the monument where using a projected animation they will see the molten iron gradually flowing into the pig bed signifying the magic and transformative moment when a number different types of stone have been transformed into iron.

We hope to show the furnace as being a working space rather than the static environment that it is today. With this in mind we would like to give the sense that it is populated by workers. We will do this by using the sound of footsteps, workers’ voices, cheering when the molten iron flows and ghost-like silhouettes of some of the workers projected onto the walls of the tunnel to the rear of the furnace.

The second layer of interpretation that would like to introduce is a fun interactive trail for kids. This will take the form of a number of textured floor markers in various different (but relevant shapes- for example a set of footprints would include a snippet of information on the workers who toiled in the furnace). These would be embossed and/or engraved so that kids children can (these could be provided on site/in the Museum of Iron/or teachers could be briefed in advance of school group visits). These will be installed at a number of key locations within the Old Furnace area an convey to the younger audience a basic understanding of how the furnace worked, why it is important, who worked there and how it must have been like to work there.

Our prototype moquette illustrates much of our vision for the Old Furnace, whilst the animated projections and sounds that we produced and tested on site focussed on producing the sounds of the bellows, the projected cross section, and the flowing of the molten iron into the pig beds.   With regards to the interactive trail we have produced a number of cardboard models of the floor markers how these would look, including footprints, pig iron, bricks and waterwheel. We have also produced a cardboard model explaining the basic science behind the furnace which would be installed on the plinth on the bridge of the furnace.

Firstly, we considered what were  the interpretation issues within the Old Furnace site. It was clear that it was very static, a bit dull and not child friendly. We decided that our interpretation scheme should be immersive, interactive, fun and appeal to a broad audience. It was also decided that we explain the basic science behind the furnace and why it is important.

We made a cardboard model of the furnace, identified the key components and drew on where we would like to create the animated projections and where the sounds would be located. We then brought projectors and speakers down to the Old Furnace to see how these performed in the area. Then we measured up the waterwheel wall and forehearth area to work out angles and the size of animation required etc. Our tech and illustrator guys then got to work on producing the animations which tested on site a number of times to ensure the projectors were located properly. Our FabLab friends made a plywood box to house the projectors. Then we sourced the sounds online and tested them with the speakers at the Old Furnace to find where best to locate them.

One of the major issues that we encountered was the flow of natural light into the Old Furnace cover building, which depending on the location of the sun caused issues with the projected animations. We came up with a number of ideas on how to mitigate against this-it could be resolved by darkening the windows in daylight and turning off some of the overhead spotlights in the building in the evening. The darkening of the windows could become part of the interpretative scheme- for example a historic photograph of the site looking towards the Museum of Iron could be printed onto a meshed – using an idea from modern bus shelters this could be plain when looking into the furnace from outside allowing visitors to still see the furnace from the outside, whilst the image on the interior would significantly reduced the natural light inside whilst contributing to the immersive nature of the scheme.

We also discarded numerous ideas developed by us and the coaches including the creation of an app, projecting on to a model rather than the structure, an interactive game throwing the correct ratio of ingredients into the furnace mouth, and a climbing frame in the shape of the bellows. We discussed a number of these at length as a team and discounted them on the grounds of the expertise of the team, the sensitivity of the monument, and limitations of what we could achieve in a few days.

What is the Old Furnace?

Why is it important?

What was the Industrial Revolution?

Was the Iron Bridge cast at the Old Furnace? 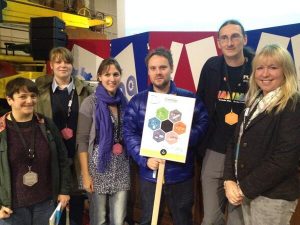