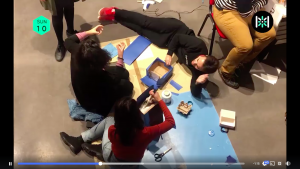 The team worked on a prototype consisting in a puzzle map equipped with an activation key, realized with the NFC technology, in order to enjoy various cultural and multimedial contents during the city walk from the cruiseships harbour to the Museo della Città.
The prototype is made of three elements: the first one, to deliver to the visitor, is a tactile map with some missing pieces which are meant to be found during the city walk. The map is provided with the city key, symbol of the Museo della Città.
The second element is composed by some dispensers containing the missing tiles. These “vending machines” are located next to the monuments and buildings of Ancona indicated on the map and they are identified with some graphic reference (each dispenser will be labelled with the key symbol).
The third element is a touch screen panel located inside the Museum with which it is possibile to interact and play.
The visitor has to:
Get the map from the cruiseships offices at the harbour and read the rules written behind it.
Take a city walk and find, next to the monuments, the key symbol and the dispenser.
Bring the key provided with the map next to the key symbol: an audio will start and the user will be told some fun facts about the monument/building.
Wait until the audio ends: the dispenser will provide the missing tile of the map corresponding to that monument/building.
Continue the city walk and collect all the tiles of the monuments/buildings of the city.
Arrive at the Museo della Città, find the interactive touch screen and, after answering some fun questions about the itinerary, collect your missing tile (this time corresponding to the Museum itself). Once completed the map, the visitor can choose to either give it back to the Museum or keep it as a souvenir to remember this experience in Ancona.

The prototype has two aims:
Include the ‘Museo della città’ among the most likely itineraries of the cruiseships tourists.
By offering the visitor, who arrives in Ancona by ship, the chance to visit the Museum, a place keeper of the millenial history of Ancona, through a fun and attractive experience. The tourist will be able to choose the itinerary length (1 h, 1,5 h…) depending on his/her needs. The maps include buildings from different historical period: they are realized with the idea to propose various itinerary themes and not only a chronological one.
In the itinerary proposed with the prototype Filbleu the monuments and buildings taken into consideration are: Loggia dei Mercanti, Santa Maria della Piazza, Statue of Pope Clemente XII and the Museum itself. The informations related to the various attraction points are linked to the theme ‘The Trades with the Eastern World’.
2. Provide the Museum with some data concerning the behaviour of the tourist, recording his/her city walk with the NFC technology.
The use of the key allows the visitor to deepen some cultural facts and the Museum staff to monitor the way tourists visit the city, recording for example the single itineraries and the times spent on each monument/building. The analysis of such data will allow the Museum to create an always more targeted offer that is able to answer to the real needs of the visitors.
In the future there is the possibility to implement the prototype, by matching the cultural contents to other users such as the inhabitants of Ancona or school groups. 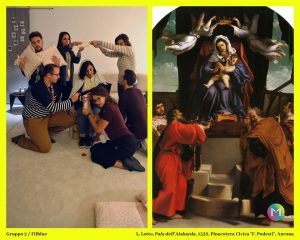